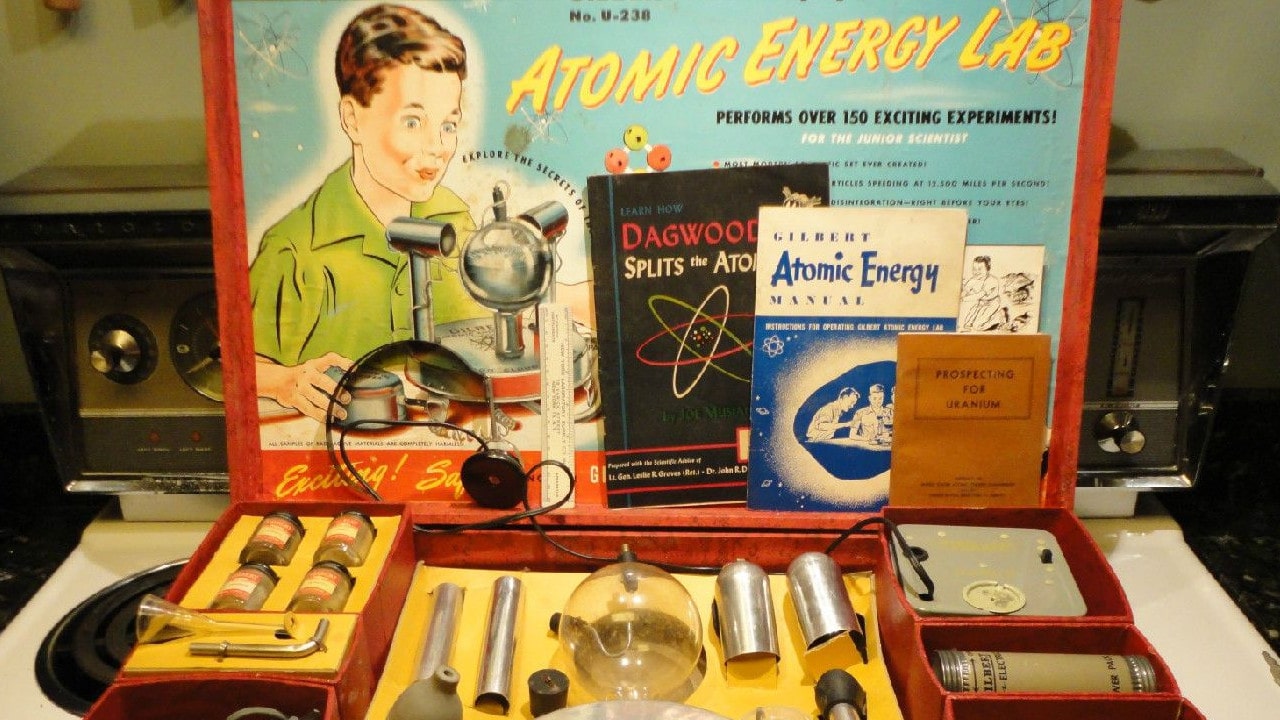 Want to know what’s even better than a nice refreshing huff of DDT? Giving children uranium to play with to their heart's desire. This may sound bizarre today, but in the Gilbert U-238 Atomic Energy Lab science kit from the 1950s, it was a reality.

During the 1950s, the uranium boom was substantial. Since it helped the government construct nuclear weapons, they mined for that stuff like crazy, hardly considering the consequences for those who dug it up. But I mean, it powered some epic bombs, so what was the issue, right?

The real problems started when the substance began to find its way into normal US households. Uranium coolers? Enjoy a refreshing swig of radiation! Uranium-based hand lotion? It’ll give you an incredible glow! Think it can’t get any better? Well, somehow, one company managed to get this dangerous substance into the hands of children.

Getting the kids in on the fun

Sure, a cute, childish science kit from your local museum probably isn’t harmful. But have you ever heard of the mass-recalled Gilbert U-238 Atomic Energy Lab? In case the name doesn’t cue you into the dangers already, here’s a hint—it’s ridiculously radioactive. But who, you ask, came up with this genius contraption?

This horrifying kit was the invention of magician Alfred Carlton Gilbert. Now, the guy was no idiot. In the same era, he produced the popular children’s Erector sets, which have remained relevant even today. Gilbert believed that toys were key to building a "solid American character," and many of his toys had educational value. Gilbert was even dubbed "the man who saved Christmas" during World War I when he convinced the US Council of National Defense not to ban toy purchases during Christmas time.

However, he definitely tried to up the ante too much with his Atomic Energy Lab—by including literal uranium.

The kits were recalled…but not for uranium

This crazy kit came with four glass jars containing natural uranium-bearing (U-238) ore samples (autunite, torbernite, uraninite, and carnotite), a particle-physics cloud chamber allowing the viewer to watch alpha particles traveling at 12,000 miles per second, a spinthariscope showing the results of radioactive disintegration on a fluorescent screen, and an electroscope measuring the radioactivity of different substances in the set.

What’s a little toxic substance to add a spark to playtime? Fortunately, the popularity of these kits plummeted quickly…but not for the reason you think.

Rather than acknowledging the dangers of this kit, Gilbert admitted that his Atomic Energy Lab was probably too difficult for even the smartest kid to enjoy playing with. Despite a number of fun suggestions (such as gamma-ray hide-and-seek and uncovering uranium fission tactics for the government), most kids found the advanced science far too complex.

And after a while, the kits were recalled due to seemingly obvious safety concerns. But a lucky 5,000 kids got to hold onto their kits!

Want one of these bad boys for your own kids? It'll set you back about $2500. The stingier (and more reasonable) among you will probably buy him or her a NATIONAL GEOGRAPHIC Stunning Chemistry Set instead.