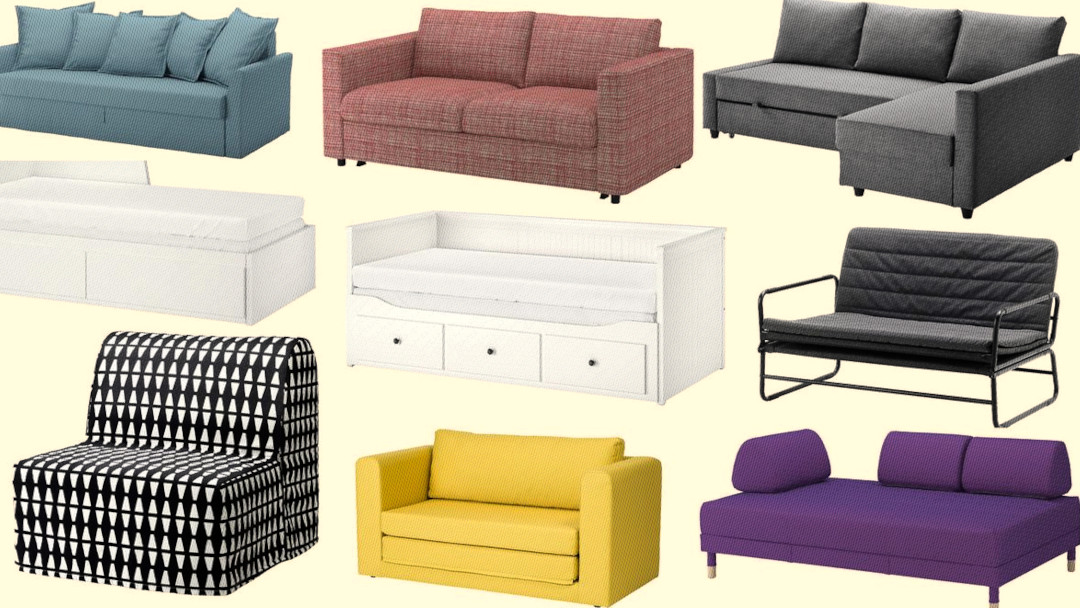 The boneyard. The widow-maker. The full-ride scholarship. The devil's day-bed. These are all nicknames one could rightly assume chiropractors, osteopaths and other healer-torture artists bestow upon that unrivaled punisher of vertebral discs, the pull out couch.

No other piece of furniture is so polarizing. It is at once expressive of good old fashioned American ingenuity, but also low-brow petty thrift. The offer of a night's rest on a pull out couch is an expression of warm welcome to the unexpected visitor, or a subtle nudge to the unwanted guest. Here's how it came to be.

The idea of a dual-duty couch is actually as ancient as the basic act of chilling. The archeological record shows that going at least as far back to the ancient Egyptians, humans constructed day-bed-like platforms using lashed-together palm fronds for kicking back while they dined, or conversed, or simply relaxed.

Later the Greeks and then the Romans fashioned "klines," which were fabric and cushion-draped long couches used for socializing but also dining.

The later Roman versions, lectus tricliniaris for those keeping score, were couches with three raised sides – a back and two arms – and depending on class may have been interchangeably used as a bed and dining seat.

Versions of a day-bed, or settee, or chaise longue, or whatever your favorite term for a sleeping sofa is, have persisted since, but get especially interesting during the Victorian era. While competing theories exist, one common explanation for the existence of the so-called fainting couch, which is a chaise with one side sporting a particularly high back, is that it was intended for the treatment of female hysteria.

Yes, furniture makers actually crafted couches expressly for the purpose of keeping women comfy while they were stimulated to orgasm by a doctor or midwife. The world is a funny place.

The first known incarnation of the modern convertible bed, however, belongs to a remarkable but relatively unknown inventor, Sarah E Goode. An ex-slave who found freedom after the Civil War, Goode moved to Chicago and eventually founded a furniture business and became quite successful.

Apparently responding to interest from customers in compact furniture to help make cramped living quarters more tolerable, Goode set to work and designed the world's first fold-out bed, complete with a spring mattress, all of which tucked neatly into what was otherwise a rolltop desk. In 1885 she became the first black woman to hold a patent, though her bed-desk was never manufactured. (Its unquestionable appeal would be proven more than a century later by one George Costanza.)

Goode's stroke of genius would be echoed a decade later by Leonard C. Bailey, who in 1899 designed and patented what would essentially be the sofa bed we recognize today with a metal frame and folded mattress.

Not long after that another approach to space saving bedding would be devised by San Franciscan William Lawrence Murphy, he of the eponymous disappearing bed.

Thomas Edison once said genius is one percent inspiration and 99 percent perspiration, which jibes nicely with the Murphy bed's apocryphal origin story: Smitten with an opera singer but thwarted by mores that forbid a single woman from being in a man's bedroom, Murphy devised a bed that folded easily and neatly away. History does not record whether his ambition was requited, however he at least earned fame for his invention—though the trademark expired in 1989.

The past century has seen untold variations on the folding metal frame and mattress standard, but without a doubt one species has all but eclipsed all others: the futon.

First introduced in 1982 by designer William Brouwer, the futon was an inspired adaptation of the traditional Japanese roll-up mattress with an ingenious folding frame that converted easily from couch to bed and back.

One day in 1982, Brouwer had a brainstorm: He knew futon mattresses are flexible: the Japanese roll them up every morning. If futons are flexible like a piece of paper, then folding them into sofabeds is simple origami.

Since then however Brouwer's triumphant creation has been endlessly knocked off and commoditized, now reduced to a dorm-room staple. Though surely nice models exist, the futon now is shorthand for "it's super cheap, but equally uncomfortable!"

That's not the story of the true sofa bed, though. To connoisseurs — that oft-boozy friend, your unhappily single aunt or uncle and, of course, the errant husband who can't obey the rule of making up before bedtime — the sofa bed remains a haunted oasis: sometimes a purgatory, others a fortress of solitude. It is the means by which in-laws are given payback in the form of permanent lumbar damage for their thousand unkind cuts.

Or where you do it for the first time when your parents aren't home. Where soul-scorching hangovers are gently nursed over quiet, darkened afternoons under the glow of televised golf. Or where kids discover the hysterical joy of a first slumber party pillow fight. The sofa bed isn't just the couch we want — it's the couch we deserve.

1 thought on “<span class="entry-title-primary">The fascinating history of the sleeper sofa</span> <span class="entry-subtitle">No other piece of furniture is so polarizing. It is at once expressive of good old fashioned American ingenuity and low-brow petty thrift.</span>”