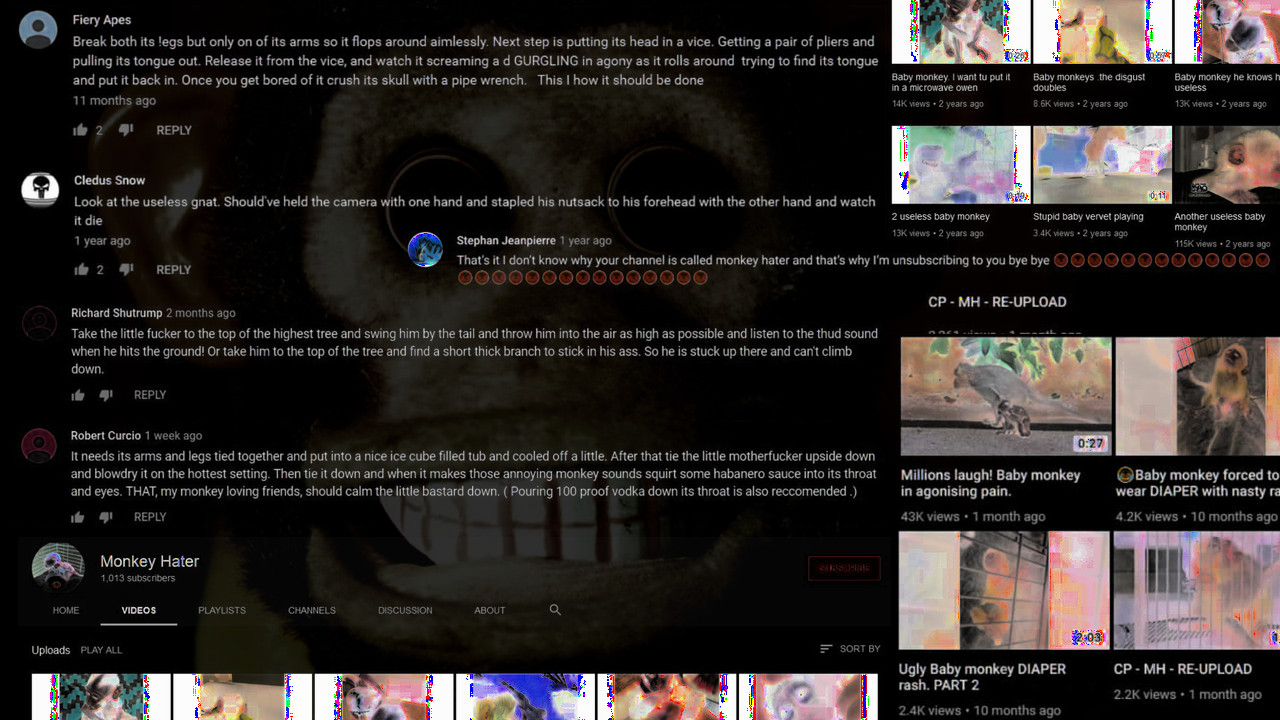 Warning: this investigation is SFW as long as you don't click yourself into the rabbit hole, but it's very media heavy.

What compels someone to hate monkeys? To look at a picture of our little cousins and and wonder aloud with your friends how wonderful it would feel to crack their skulls open with a frying pan?

YouTube is host to many diverse communities coming together to create, share, and comment on their particular thing. Furries shitting in their diapers or even men living in septic tanks – there's always a video, always another user with your specific interest looking to connect.

Out on the periphery, on the very edge of perception, there exists some groups which must remain hidden, because deep down they know they are completely fucked up. One such group would be what internet researchers are now calling the YouTube monkey torture network.

To understand its origins, I need to take you on a journey. A journey of truth. And there's no better place to begin than the /x/ board.

And it quickly got lots of attention. How was it possible that a monkey torture network could exist on a platform owned by google, a company known for sanitizing anything anti-PC or not sufficiently family friendly? It just seems to fly in the face of common sense. Surely there has to be some very mysterious back story.

And with further digging it soon became apparent that this monkey hating business wasn't a recent phenomenon or a flash in the pan fad: it was something that had existed on the platform for multiple years, in varied incarnations, and the community around it comprised thousands and thousands of users.

As the investigation began to bear fruit, certain key points rose to the top. First of all, that they were seemingly dealing with a sophisticated network of users, who had a joy and a common interest in sharing videos which dealt with the abuse of what they referred to derisively as, among others things, "tree rats."

Who exactly were these users? How long had they been engaged in this activity? Why on earth did they hate monkeys so much? What motivated them? Where did they find their sick content? And was there a deeper meaning to any of this?

Second, the users involved in this monkey torture network were big on using YouTube playlists to distribute the videos they found. Playlists with very mundane, normal names that would surely keep the heat off of them, like: "baby monkeys suffering," "wounded monkeys," "rotten little vermin make you puke," "dead monkeys," "monkey abuse," "baby monkeys make me sick," and, of course, "vintage tree rats."

Stranger still, as time went on, it was soon discovered that this wasn't the first time this subject had been brought up. The /x/ board hadn't stumbled into something unknown up until this point. In fact, it had been discussed at length on multiple websites for a span of nearly 5 years.

A YouTube user would stumble upon one of these playlists or read a comments on one of the videos, and become curious about what is going on. They share their finding with their own community, and then after a few weeks of initial interest, it peters out without really going anywhere.

I can't explain why thy this particular YouTube controversy just can't seem to get off the ground and always dies off without anything being done about it. The only thing known for an absolute fact in all this is the unbridled hatred that thousands of YouTube accounts have for innocent little monkeys.

A quick glance at any of the comment sections to the videos in the playlists shows just how deep that hatred runs.

Not too surprising when you look at the names of some of the accounts taking part in this – "killbabymonkeys," "Monkey Hater" – or the videos they upload to their own accounts (none of this has been removed at the time of writing – March 31 10:59PM Paris time):

Scattered throughout the comments made to these channels, you find ones like this:

Which suggests confusion about why the channel they were following is uploading material that seems out of character for who they were and/or what they themselves would normally subscribe to. This is potentially a clue that some of these accounts are hacked, as if the YouTube monkey torture network didn't have enough organic users: they needed to go out and harvest new YouTube accounts and channels. Just speculation at this point.

But among all of these monkey torture affiliated accounts, one in particular stood out to researchers on the /x/ board.

If his mug seems vaguely familiar to you, a reverse image search with Tineye reveals the reason for it:

Which leads to The face of pure evil: Australia's worst paedophile.

So now /x/ naturally wanted to know why someone involved in a monkey torture network is LARPing as a prolific child sexual predator – Australia's worst, in fact – who targeted not just little children, but also babies.

And some of them managed to get hold of him on Discord (of course):

It didn't reveal much but a few pieces of information. The user was definitely genuine in his hatred of monkeys. He was fairly new to the monkey torture community. And he had interacted with people who had been part of it for much longer than himself.

And when it comes to that community, Peter wasn't alone in his choice of edgy usernames, ones tending to hint at a secondary underlying interest other than monkey abuse.

The monkey abuse videos themselves run the gamut from re-uploaded nature documentary footage that's been given a misleading title so as to trick you into believing it was going to be monkey abuse when none was present, to military units using lab animals to test out chemical warfare treatment procedures. Some of the videos were in Chinese, others in English. Some featured monkeys hit by traffic, or beaten, or killed by another animal.

The only thread running through all of them was that they were put into playlists by the monkey hater network so they could be commented on, and used as a vessel to express their hatred of these innocent creatures.

The speculation surrounding these videos and this community have coalesced into multiple theories at this point:

Some people believe that the users are engaged in illicit, illegal activities, and they're using this monkey stuff as a smoke screen that point people towards actually illegal content while evading law enforcement detection.

Others think it is a variant of the Elsa and Spiderman phenomenon that blew up a few years ago.

Some believe it's a geographical, cultural phenomenon. This theory posits that even though most of the usernames and videos are in English, they're actually really from Asia.

The theory I personally find the most interesting is, I think, the simplest one: it was just a prank, bro. A five year long trolling op by a group of people that created something much bigger than they had perhaps anticipated.

I think that becomes slightly more obvious when you look at some of the accounts surrounding all this. Such as Peosphoros:

Peosphoros is a YouTube user that follows the Peter Ridell account and has commented on the monkey abuse videos. It describes itself like this: "We are a politically correct Trans LGBTQMN Pink Metal band who are against Black Metal. Social Genocide Warriors."

One look at their uploads and you can definitely tell the channel is run by edgelords. But how does it specifically relate to our monkey torture phenomenon?

Consider this statement delivered by a man and a woman in one of their videos: "We support extreme political correctness, which means we also support underrepresented minorities of nazis, fundamentalist islamists, and child molesters. Hence LGBTQMN. We are also the proprietor(?) of edgetivism."

But what is edgetivism? According to Edgetivism.com, which redirects to Peosphoros' website CuntRape.com, it's defined like this: "Edgetivism is the practice of stamping your art with the most reprehensible themes of your time to defend the idea that art is limitless."

When you look at the creation dates for the Facebook and Instagram related to this particular art/music group, you'll see that they coincide roughly with the beginning of the monkey abuse phenomenon on YouTube.

You may or may not want to check out their other stuff.

So did a collective of trans* edgetivists gather together on YouTube, decide to LARP as child sexual predators and create a YouTube monkey torture network – all to show the world that their avant-garde finger painting is pretty BAD ASS (and also sell records via their BandCamp)?

While YouTube has a lot of sick fucks who just really fucking hate monkeys and send millions of views to these bizarre playlists, I would say yes.