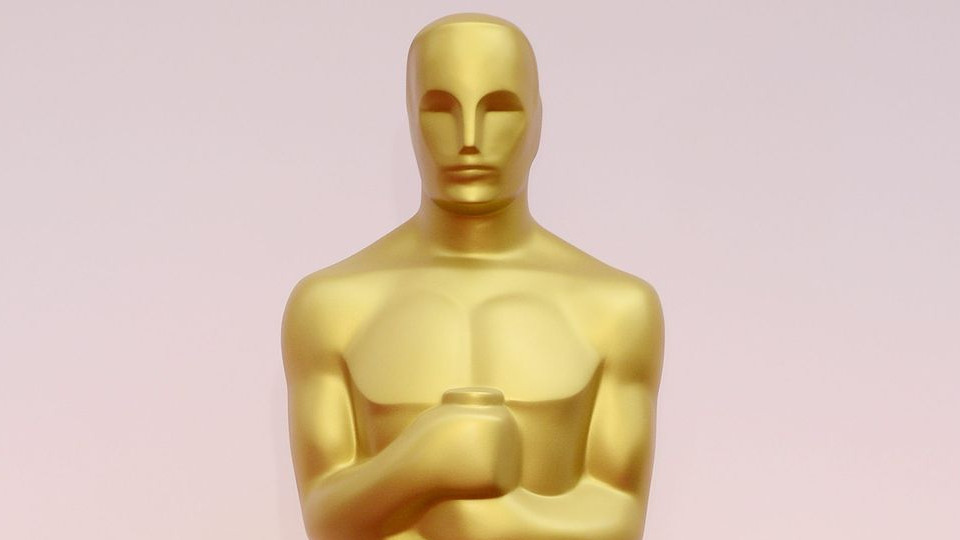 You've done it – you've won an Oscar. So now what do you do with it? For such a coveted prize, Oscar sure does find his way into some odd places. A hen house? The refrigerator? One surprisingly favorite spot: the bathroom, which doesn't exactly seem like the best place to keep the Golden Guy. (They can rust, as Jodie Foster found out.)

Even odder, several stars have given theirs away or, worse, lost track of their Oscars completely. A handful have been stolen, but since the Academy forbade the sale of the statuettes in 1950, good luck on finding a buyer.

Many Oscars end up, as you'd expect, on display in a trophy case or a handy bookcase where friends and family can grab it and give their own acceptance speeches, although there are apparently quite a few Oscars tucked away in sock drawers or boxed up in storage.

Read on to see what stars like Nicolas Cage, Jamie Foxx, Emma Thompson and Angelina Jolie have done with their Oscars.

You keep it where!?

Russell Crowe (Best Actor, 2001, Gladiator) reportedly keeps his in a chicken coop on his ranch in Australia where, he claims, it's inspired his hens to lay larger eggs.

Timothy Hutton (Best Supporting Actor, 1981, Ordinary People) just told USA Today, "About five years ago, my sister and I were having a party at my house in upstate New York. She put it in the refrigerator. She thought that would be kind of funny to put the Oscar in the refrigerator when people would go grab a beer or something ... It's still there."

Jack Nicholson (Best Actor 1998, As Good As It Gets, Best Actor, 1976, 'One Flew Over The Cuckoo's Nest,' Best Supporting Actor, 1984, 'Terms Of Endearment') - The one-time Joker was rumored to use one of his three Oscars as a hat stand.

Goldie Hawn (Best Supporting Actress, 1970, Cactus Flower) is very zen about it: Her Oscar lives in her "meditation room" because, as she told a syndicated columnist, "trophy rooms are the opposite of me."

Nicolas Cage (Best Actor, 1996, Leaving Las Vegas) had displayed it in his movie room in his Los Angeles home. Now that he's trying to establish residency in Louisiana, as he told the media at the Toronto International Film Fest last year, "One of the ways they determine if you're a resident is they ask you, 'Where is your Academy Award?' So it's in a truck somewhere, moving through Louisiana."

Dustin Hoffman (Best Actor, 1980, Kramer vs. Kramer, Best Actor, 1989, Rain Man) - His two gold guys have apparently grown on him over the years: "I used to keep my Oscars out of sight. But now they are on my mantel in my study. What made me change? Probably years of therapy!" he told InStyle.

Morgan Freeman (Best Supporting Actor, 2005, Million Dollar Baby) - "When my house was being built in 1988, one of the guys who was doing finishing work said he wanted to construct a trophy cabinet for me," Freeman says. "And he put an acrylic sign on the top shelf saying 'No Parking: Oscar Only.' So when I won, I took down the sign and put the Oscar in its place."

Cate Blanchett (Best Supporting Actress, 2005, The Aviator) - "I ended up putting it on the grand piano because all my friends want to pick it up and pose with it," she told the Boston Globe. But her Oscar isn't stationary, according to InStyle: "It's been in the study recently. It moves around a bit like my family and I do."

Mira Sorvino (Best Supporting Actress, 1996, Mighty Aphrodite) - Casual guests won't get to see Mira's statue: "My Oscar sits on my dresser in my bedroom along with some childhood memories," she's quoted as saying in the Daily Mail.

Liza Minnelli (Best Actress, 1972, Cabaret) honors her late father Vincente Minnelli by keeping her Oscar next to the one he earned as Best Director in 1958 for 'Gigi.'

Catherine Zeta-Jones (Best Supporting Actress, 2003, Chicago) - Her Oscar is well-traveled: "He's in our home in Bermuda. I figured that not many Oscars have lived there. Of course, everyone who visits wants a photograph with him," InStyle quoted the star.

Jodie Foster (Best Actress, 1989, The Accused, Best Actress, 1992, The Silence of the Lambs) - "I used to keep them in the bathroom because they looked good with the faucets. But when they started getting corroded on the bottom, I had to move them to a trophy case in my den," she told InStyle.

Good news, a rusty bottom is grounds for the Academy to reissue an Oscar, as it did for Jack Lemmon. Juliet Binoche preferred to be reminded that the beauty of the award was not its appearance. She told InStyle in 2005 that when she first brought it home, her young son was fascinated by it and managed to peel off its gold veneer. (Although it's heavy, the Oscar is, sadly, not made of pure gold.)

Emma Thompson (Best Actress, 1994, Howard's End, Best Adapted Screenplay, 1996, Sense and Sensibility) - Talk about sensible: She confirmed that she does indeed keep them "in the loo." As she told Time in 2006, "They look far too outré anywhere else. They're great big, gold, shiny things. They're up there tarnishing quietly along with everything else I own, including my body."

Elizabeth Taylor, Susan Sarandon, Lionel Richie and Sean Connery also keep their Oscars in their bathrooms. Might want to watch that those awards don't rust, folks! Blanchett said she had similar thoughts: "I thought about sticking it in the loo. I was going to be very witty and Emma Thompson about it," she said in 2008. But I'm actually really proud of it." So onto the grand piano it went.

Gwyneth Paltrow (Best Actress, 1999, Shakespeare in Love) keeps her Oscar in storage, according to the Scottish Daily Record, who quoted her as saying, "I don't want that thing in my house. It scares me."

Anna Paquin (Best Supporting Actress, 1994, The Piano) - Having won her Oscar at a mere 11 years old, she's kept hers hidden, "otherwise would make my friends feel strange." In 2009, she told Playboy her trophy is "in the bottom of my closet, gathering dust."

Tilda Swinton (Best Supporting Actress, 2008, Michael Clayton) confirmed to Newsweek that she gave her Oscar to her agent, as she'd promised in her acceptance speech.

Jamie Foxx (Best Actor, 2004, Ray) said he gave it to his manager. "I got too many people coming to my house. I don't want it to walk off. People stealing it and leaving me with an Oscar Mayer instead." He does stop by and visit, on occasion, but adds, "I like to keep it on the back burner. Sometimes people ... think that it was the end-all of the end-all, but it's not. It was a great time in your life, but you got to keep moving."

Angelina Jolie (Best Supporting Actress, 2000, Girl, Interrupted) told James Lipton on Inside the Actors Studio in 2005, "I haven't seen it since the day I won it. I don't hold onto awards because I think it's good not to have them around." She gave it to her mother, Marcheline Bertrand, who died in 2007.

Isaac Hayes (Best Music, Original Song, 1972 Theme From Shaft) used to display his at his restaurant in Memphis. He had originally given it to his grandmother (then 80 years old), but she returned it to him on her 100th birthday.

Jimmy Stewart (Best Actor 1941, The Philadelphia Story) sent it to his father in Indiana, Pennsylvania, who displayed it in the window of the family's hardware store for 25 years.

Shelley Winters (Best Supporting Actress, 1960, The Diary of Anne Frank) - Talk about altruistic: She donated her first Oscar to the Anne Frank Museum in Amsterdam. She kept her second one, for 1965's 'A Patch of Blue.'

Marlon Brando never picked up his Oscar for The Godfather, having famously refused it. He wrote in his autobiography that he had no idea where his Oscar for On The Waterfront had gone.

Olympia Dukakis (Best Supporting Actress, 1988, Moonstruck) - Two days after she won the award, it was stolen by thieves (who took only the Oscar) in a break-in. She was issued a replacement from the Academy.

Hattie McDaniel (Best Supporting Actress 1940, Gone with the Wind) willed her historic Oscar to Howard University in Washington, D.C. It disappeared during the campus riots of the 1960s.

Whoopi Goldberg (Best Supporting Actress 1991, Ghost) - Her Oscar was stolen in 2001 after it was sent out, via UPS, for cleaning. It was eventually found in the garbage at the Ontario Airport in southern California. UPS returned the Oscar to the Academy, who sent it back to Goldberg. She issued a statement saying, "Oscar will never leave my house again."

William Hurt (Best Actor 1986, Kiss of the Spider Woman) - His Oscar was stolen in 2005. "The house was being moved. It just got lost in transition," he said at the 2006 Oscar nominee luncheon. He would like it back, but said he never kept it on display. "I don't sport trophies around the home. I don't want my children thinking of me that way."

Claymation whiz Nick Park keeps his four Wallace & Gromit Oscars in the canteen at his company Aardman Animations. "The Oscars are for everyone, not just me," he told the Daily Mail.

7 thoughts on “<span class="entry-title-primary">Where do Oscar winners keep their statue? You'd be surprised</span> <span class="entry-subtitle">A hen house? The refrigerator? One favorite spot: the bathroom, which is a bad idea (it rusts).</span>”