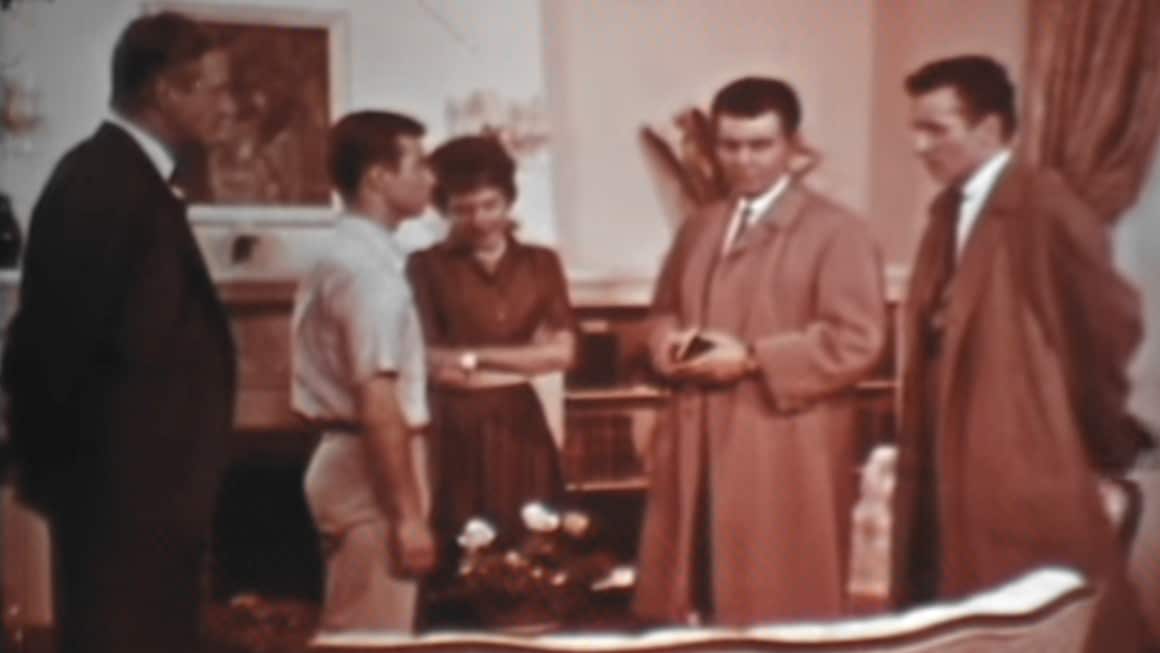 Sex, violence, and sensible heels on housewives...this movie has it all. Pages of Death was a half-hour video commissioned by The Hour of St. Francis radio program and distributed by a group that was affiliated with the Catholic Church. Its mission? To teach the world about the dangers of girly mags.

Yes, we're talking about those magazines with ladies in their underwear. No, it doesn't make sense. That didn't stop them from creating a cinematic masterpiece, though.

The "very special story" begins with an eleven-year-old girl named Karen Flemming, whose charming headshot in a frame could only mean one thing: homegirl is gonna die, and she gonna die good.

We find out that Karen's parents are basically right out of Leave It to Beaver except for the fact that her dad apparently doesn't give a shit about her.

The mom's like "I'm really worried about Karen," and then the dad goes "Seriously don't worry about her. I already forgot she was my daughter." Well, he doesn't actually say that, but he's way more interested in his newspaper than the fact that one of his 27 kids is missing.

Then we can fast forward a little bit to the part when we meet Paul. Because Paul is important. He's our killer (spoiler alert).

Paul raped and killed a little girl, so he's as shitty as they come. He's also a dumbass because he forgot to wash his shoes after he did it. This was before CSI and Law & Order were on the air though, so it's slightly more understandable how he could be so stupid.

Why did Paul do it? The nudie mags. Oh, those nudie mags. All of the "GALS!" and boobs and bare ankles...it was too much for Paul.

So he killed Karen.

The moral of this story is not that Paul is a murderous prick with insufferable parents who think he can do no wrong. No, the message is that the nudie mags did it.

Oh, and the guy who works at the corner store also did it, because he sold the magazines.

So obviously all of this is bullshit, since if everyone who ever saw pornography became a murderer, we'd all be killed by now.

Anyway, you need to watch the whole thing because my recap just can't do it justice.

Oh, and for everyone whose mind was boggled by those bizarre statistics at the end:

Oh, by the way, the narrator, Tom Harmon, who asserts all of these facts? His wife was Elyse Knox, an actress who started her career as a pin-up girl during World War II.

Now if that isn't the look of someone who'd inspire you to murder a small child, I don't know what is.